History of TMM School and College of Nursing

TMM College of Nursing is a health care institution managed by the Christian Brethren Society and demonstrates the compassion and healing through excellence in education, service and research. TMM College of Nursing offers GNM, B.Sc. (N) and M.Sc. (N) Programmes. TMM is now a registered Charitable Society under the official name “The Dewan Bahadur Dr. V. Verghese Hospital Trust Association”.

Tiruvalla Medical Mission began as a dream in the heart of Dewan Bahadur Dr. V. Varghese the personal physician of the Maharaja of the State of Cochin at the time of his retirement. As an ardent Christian, he read and studied closely the works of early missionaries. Drawing a page from George Mueller a prayer warrior and a leader of the orphanage movement in England, Dewan Bahadur dedicated his life, resources and skills for the betterment of society. Dr Verghese retired from the royal service and immediately began to give shape and structure to his vision.

In 1935,Dewan Bahadur Dr. V. Verghese, established a small hospital on a small wooded hillock near the Tiruvalla railway station, Kerala, India.The same is the present site occupied by the main hospital of Tiruvalla Medical Mission (TMM).Along with laying the foundation for the hospital, he also laid the principles for service and administration; all decisions had to be in accordance with ethical and Christian principles. Thus, TMM began as a small step of faith for Dewan Bahadur, but a giant leap for the people of Central Travancore.

In 1940,Dewan Bahadur Dr. V. Verghese constituted a Charitable Trust for this hospital and handed over to the medical missionaries of Brethren persuasion. The Trust began to be popularly known as ‘Tiruvalla Medical Mission’ (SaippinteAsupathry) with Dr. R.S.Churchward, an eminent missionary doctor from England taking over as Medical Superintendent. In those days’ hospitals were few and far between and nursing study courses unheard of in the State of Travancore or in Malabar. However, in the State of Cochin a 3- year course in nursing was in existence from 1928 but midwifery training for nurses was not compulsory.

In 1943, a Nurses Training course was started in TMM Hospital. The Medical Missionary team of TMM, being well aware of the contribution of the trained nurses back in England felt that Indian girls in large number must be trained as nurses in order to give efficient health care in hospital and community. Duration of the course was four years. Medium of instruction was Malayalam. The first Principal of the school was Mrs. Rachel Churchward, a Missionary Nurse who was assisted by two other missionary nurses- Miss Parkinson from England and Miss Elliot from Australia. The next forty years-until 1983 TMM School of Nursing had the advantage of having 15 trained Missionary Nurses from overseas teaching in this school along with their Indian counterparts. Their dedicated loving service culture coupled with a disciplined and simple life style became a legacy being cherished by TMM nurses ever since. In 1943 Travancore State Government also started a four-year programme in Nursing (3 years of general nursing and one-year midwifery) and the school was attached to the General Hospital, Trivandrum. Hence in the State of Travancore the nursing course had asimultaneous beginning in Private and Public sector.

After four years of TMM’s training when the first batch of girls completed their course, CMAI inspected the TMM School of Nursing and recognition given to admit 15 students for GNM Course. But that year only 14 students got admitted. Since the recognition of CMAI, examinations were conducted by South India Board of Examination of CMAI Nurses Auxiliary and certificates issued by CMAI.

A year after forming the State of Kerala the board of examiners was constituted by KNMC and approved by the government.
In 1958, recognition for midwifery course was accorded to TMM School by KNMC. However, Examinations continued to be conducted by CMAI. Midwifery certificates were registrable by KNMC.

Now it was Miss Mary Bardsley’s turn to be the Principal. A new hostel was built in 1962.SNA local unit was started in 1963.

In 1964, integration of Public Health to Nursing and Midwifery was commenced and recognition was given by KNMC for both nursing and midwifery. Both the certificates were also registered by KNMC.

In 1964-65, TMM School of Nursing received the 2nd prize for SNAI Diary- (National level –from Delhi).

In 1971, the Philosophy of the school of nursing was framed. In this year TMM inaugurated a new building for the school of nursing.
In 1975, GNM integrated course (three and half years) commenced. The following year the student’s intake was increased from 15 to 20, which was stepped up to 30 in the year 1983. In 1987 the duration of the course was reduced to 3 years. In 2005 the course duration was again increased to three and half years. The student’s intake of our school was increased to 40 girls. TMM constructed a brand-new hostel making the stay of students more comfortable.

In 1983, the office of Principal changed from a non-Indian missionary nurse to Indian hands. In mid-1983 Miss Mary Bardsley, the last non-Indian Principal, left India and Mrs. Kunjamma Itty was appointed the first Indian Principal of TMM School of nursing.Miss Kunjamma Joseph after seven years of teaching experience in India and working one year in Temple University Hospital, USA returned back to TMM in 1971 as Mrs. Kunjamma Itty. Next 12 years she worked in TMM in various positions as senior tutor, Nursing Administrator, and Nursing Supt.

In 2017 TMM School of Nursing Completely shifted to College campus under one Principal.

The training imparted in TMM School of Nursing has its standard and discipline acquired from the land where Florence Nightingale herself worked. Therefore, it is not surprising that the graduates of this school, now numbering over 1400 offer admirable services in health sector across the world. The School continues to grow strong and makes its presence felt in the hospital and the community around Tiruvalla.

2004 witnessed the expansion of The Dewan Bahadur Dr. V. Verghese Hospital Trust Association with the birth of TMM College of Nursing, a four year degree course. Had the approval of Government of Kerala and M.G. University and the recognition by Indian Nursing Council and Kerala Nursing & Midwives Council. First batch of 50 students began their academic year of study in October 2004.

Shri Oommen Chandy, the then Chief Minister of Kerala formally inaugurated the college on 6th February 2005. On the same evening we had the first combined Lamp Lighting Ceremony of the first-year students-numbering 90- of both the School and College of Nursing. Initially the college functioned from the Mar Thoma Academy, a rented building, adjacent to TMM Hospital. Girl students were accommodated in the girls hostel of Mar ThomaCollege, Tiruvalla.

Our first Principal was Mrs. Greeda Alexander who was sent to us on her Sabbatical from Christian Medical College Hospital, Vellore. Early 2005 Dr. Mary S Immanuel former Dean of CMC College of Nursing, Vellore also joined us as Director of Nursing Services and a Consultant to the College of Nursing.
Student’s admission norm, then prevailing in the State in self-financing professional colleges was 50% as Government quota and the other 50% for the Management as per inter se merit of the community’s candidates. Merit list of the Management candidates were prepared by the Association of the Management of Self-Financing Nursing Colleges of Kerala (AMSFNCK). This admission policy was effective until the admission of the year 2006.

In 2006, The Government of Kerala brought out a New Education Act with sweeping changes in the education policy especially in professional colleges in the private sector. Several provisions of this new Act amounted to a near takeover of the private institutions by the government. In the matter of student’s admission and reservation etc. the managements, whether minority self-financing or not were left as mere investors and caretakers of their institutions. However early 2007 it pleased the Honorable High Court of Kerala to strike down most of the provisions of this Act especially related to professional colleges.

Minority Status and the new Admission Policy of the College of Nursing:

In 2007, TMM College of Nursing was certified by the National Minority Commission for Educational Institutions as a Minority Educational Institution. This privilege enabled our Institution to exercise our right to fill all the seats by the management and continue to levy a uniform fee from all the students. Thus, students of our community in larger number got a chance to get admitted in our college on inter se merit basis from the rank list of AMSFNCK.

TMM’s own Buildings for the college:

In 2005, TMM acquired nearly six acres of land as two plots in Kaviyoor – 5 kilometres off Tiruvalla. The Koshy family, Ebenezer, Kaviyoor, donated nearly two acres of this. Two buildings were constructed in this land, one for the nursing college and the other hostel for girl students of the college. Each building is in three floors with a total built area of 74,000 sq. ft.
In early 2007, the college and hostel began functioning in the new campus. P. K Sreemathi, Minister of Health and Family Welfare, Govt. of Kerala formally inaugurated the college building on 21st May 2007 followed by Mar Thoma Metropolitan Philipose Mar Chrisostum declaring the girls’ hostel opened.

On 21st May 2008, the first College Day was celebrated. Mr. Justice K.T. Thomas, former Judge of the Supreme Court of India being the Chief Guest released the first college magazine ‘Elixir-2008’ during the function.

2008 witnessed the passing out of the first batch (2004-08). Following this the students completed the mandatory 12 months internship which earned their B.Sc. Nursing degree.

In 2011, M.Sc. Nursing course started in TMM College of Nursing and is one of the few Self-financing nursing colleges, given No-Objection Certificate in 2009 itself by the Government of Kerala to start M.Sc. Nursing Course. Indian Nursing Council, had given us approval to admit 25 students in five specialties for the M.Sc. Nursing Course in the academic year 2009-10. However due to the delay on the part of the M.G. University in processing the application we lost one year. From the year 2010 the university affiliation was transferred to Kerala university of Health Science, Thrissur. By the end of the year 2011 TMM College was given Provisional Affiliation to M.Sc. Nursing by the new University. Indian Nursing Council gave us special time extension which enabled us to admit 9 students in two specialties – (4 in Med-surgical and 5 in OBG nursing) during academic year 2011-12 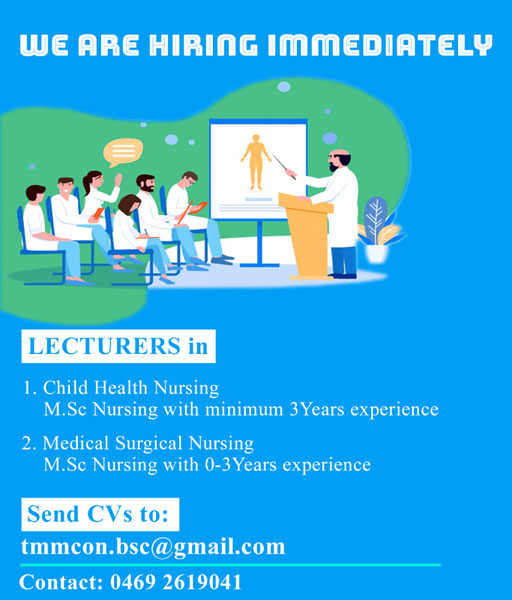